CGS Group at the start of the B2Run Munich 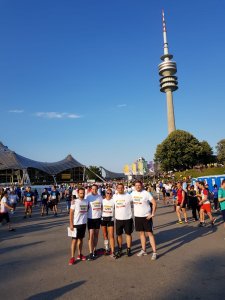 On Tuesday, July 17, 2018, it was time to get out of the office and into the running shoes! For the first time the CGS Group took part in the B2Run company run in Munich. Five of our colleagues met to get in the mood for the event in the Olympic Stadium with a total of 30,000 participants. With a distance of 6.1 kilometres, the event also offers occasional runners the opportunity to participate. The focus is on the fun of moving with your work colleagues.

While the top runners of the first starting blocks reached the finish line after just under 19 minutes in beautiful weather, the CGS team waited in the midst of several hundred other runners in the Olympic Park for the start release. Due to a resulting thunderstorm cell, with accompanying rain, the starts of the last three blocks were postponed. Shortly after 8 p.m. the event management informed that due to the beginning darkness and the wet track there will be no more starts.

So much for the premiere of our running group. But that didn’t stop our team from taking the atmosphere of the Olmypia stadium with them.