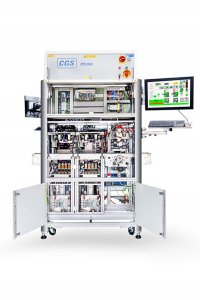 The automated Inline Test Station (ITS) from CGS features a patented test head design that operates in combination with integrated test and measurement equipment in the smallest possible installation space in comparison to DUT (Device Under Test) size. Its modular design, which features a variable number of test heads, adapts easily to production lines to optimize throughput.

Flexibility and efficiency are hallmarks of the system. The ITS provides a range of test head designs to accommodate cassettes for DUT sizes from 100 x 100mm (N4) to 450 x 450mm (N7) and up to 3,000 test pins. Test-specific upper and lower cassettes can both be fitted with test needles and other project-specific probes or sensors, and they are easily changeable in less than a minute. If  necessary, cassettes allow for lateral contacting of the DUT’s 90-degree PCB-mounted connectors on all four sides. In addition, both RF applications and high-current contacting are possible. Contact actuation is completed in a continuous path via CGS’s patented double-stroke technology. Units come with a mechanically adjustable fixed width conveyor, or an electrically adjustable variable width option for fast switching between DUTs. 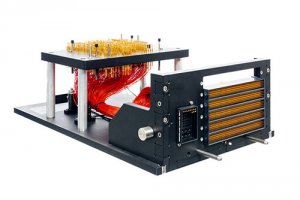 ITS systems add versatility to production environments — units feature multi-stage contacting, either by mixing spring loaded and pneumatic test probes, or by segmenting the test head’s stroke in up to five segments. The latter is especially useful for in-circuit testing (ICT). The ITS also manages functional testing (FCT), integrated flash stations, JTAG/Boundary Scan equipment, scanners, stampers or laser marking devices. If needed, any combination of test requirements are possible in one machine. A fail conveyor operates either parallel to or at 90 degrees to the main conveyor. A gripper or shuttle facilitates distribution on multiple parallel conveyors, either laterally or above the main conveyor to accommodate additional test heads. This contributes to a significant increase in throughput with little or no increase in the system’s footprint. 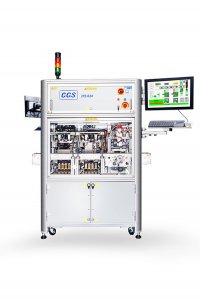 Reliability and operating ease make the ITS of particular benefit to operations where reduced space or the need for line consolidation is necessary. A typical test configuration, such as validating automotive body control modules, includes 3 test heads in N4 size and an additional fail conveyor, all contained in a footprint (WxD) of just 145 x 130cm. Test heads are usually outfitted for ICT, Flash and FCT. The fail conveyor transports any defective parts to an integrated storage box for repair or disposal. To further save space, test towers are eliminated by integrating power supplies and test and measurement equipment within the ITS system. Units provide a dedicated space for 19” rack mount equipment, such as CGS’s MFTS500-series matrix and PXI chassis, as well as room for a CompactRIO chassis next to the PLC. Internal cassette storage adds convenience when using the ITS for multiple projects.

The ITS’s best-in-class design features strategically located mass interconnect solutions to physically divide the ITS into test head and measurement sections, thus allowing access to all components from front and back for easier and faster maintenance and servicing compared to traditional designs.

CGS offers the ITS as a turnkey solution, including project-specific cassettes, measurement equipment, and programmed test steps. After an acceptance test at one of CGS’s locations, installation and start-up at the customer’s plant is typically completed within two days.