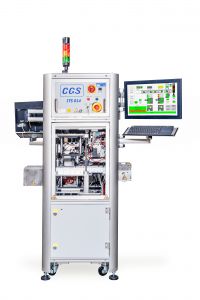 With the integration of the company Complex Vector, the CGS Group has over 20 years of Boundary Scan experience, which can now be combined with existing expertise to create a highly efficient system.

A general advantage with Boundary Scan is that only a few needles are required and therefore the adaptation is very cost-effective. B-Scan in CGS’s ITS (Inline Test Station) means simplified handling, as no dedicated test site is required. Diverse possibilities from simple test over embedded function tests to flash programming are conceivable. In order to keep the test times low or to adapt to the cycle times, the system can be additionally optimized by means of gang test or gang programming.

The B-Scan system from Göpel electronic also offers the possibility to combine B-Scan with an ICT (In-Circuit Test) to increase the test coverage without the need for another test station. In doing so, the test gaps that usually remain between the test coverage of the B-Scan test and the ICT can be closed by both systems interactively and comprehensively increasing access to the DUT (device under test). Depending on the DUT  and the test requirements, the tests can all run in one head or be split over several heads to increase the speed.

The modular design of the ITS with variable number of test heads with quick-change cassettes and electrically adjustable conveyor enables the customer to adapt the test system perfectly to his production environment. In particular, the low space requirement due to the patented test head design or the increase in throughput through parallel test procedures should be mentioned.

A 1-head ITS for PCBs (Printed Circuit Boards) of up to 100 x 100 mm is only 65 cm wide, relatively light, and thus can be almost without constraints, such as e.g. Passenger lifts and doors to be transported in a building. Offline, it can be used as a test station for prototypes and pre-series if no dedicated desktop system is available. However, the true advantage of the ITS lies in the automated testing of medium and high volume products. Due to its size, a pre-commissioning of the system in the laboratory can be done before the production line is installed and thus the time to market is reduced.